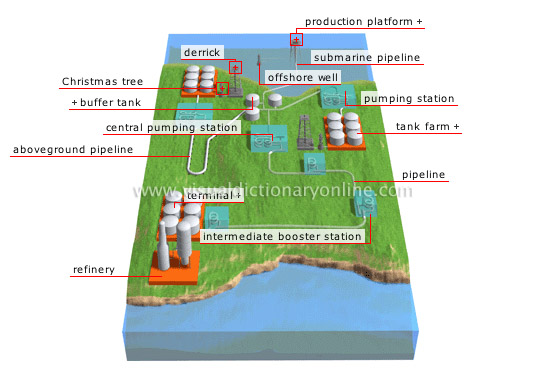 crude-oil pipeline
Continuous underground, aboveground or underwater oil pipeline that can be thousands of miles long (the Trans-Siberian pipeline is 3,800 mi long).
derrick
Metal structure erected over an oil well;tools for drilling through rock are raised and lowered through it.
offshore well
Hole dug in the sea floor to extract oil deposits;equipment such as the Christmas tree rests on the seabed.
tank farm
All the facilities (such as tanks and pumps) that store large quantities of crude oil to be sent later to the refinery.
buffer tank
Large container that stores crude oil temporarily before it is pumped back into the pipeline.
aboveground pipeline
Oil pipeline that rests on aboveground supports to protect it from frozen ground (e.g., the Alaska pipeline).
central pumping station
Powerful pumping station that maintains the pressure required to move the oil along the pipeline to the next pumping station.
terminal
Facility located at the end of the pipeline that includes equipment such as tanks and pumps;it receives the crude oil before it is refined.
refinery
Plant in which crude oil is refined (separated and scrubbed) to obtain a broad range of finished products (including motor fuel and oils).
intermediate booster station
Booster station that reinforces the action of the central station and maintains the flow of oil in the pipeline network.
pipeline
The steel piping that carries oil from one treatment facility to another.
Christmas tree
Group of devices at the head of the producing well that regulate the flow of oil being extracted from the deposit.
pumping station
Installation located at regular intervals along the pipeline that is fitted with motorized pumps;it ensures that the oil flows inside the pipeline.
submarine pipeline
Pipeline installed on the seabed that carries oil extracted from an underwater deposit to shore.
production platform
Facility used to extract underwater oil deposits;the separation and treatment of hydrocarbons are mainly done here.
بازگشت به لیست واژه ها